Letter to the Editor
re Electric Cars 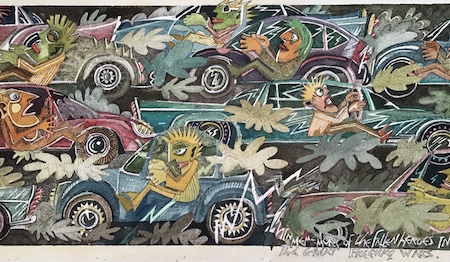 As Jack Cooper (author of the essay Sleepless in Fact) wrote to me recently,

“Privately owned electric cars are not going to save us. Many observers have now realized the folly of these resource-intensive vehicles and are putting their chips into mass transit, electric bikes, and good old-fashioned urban planning that encourages walking.”

For those who, like me, want to write letters to editors and/or policymakers but sometimes don’t know where to start, a fine example follows below. Steve Goldman’s letter was published in the Eugene Weekly (12 December 2019).

It’s reprinted here with permissions from Steve Goldman and Jack Cooper, two of the Green Geezers, a group of climate activists based in Eugene, Oregon.* With their blessing, concerned readers like you and I are free to use this as a template for our own letters:

I’d like readers to look deeper into the arguments Phil Barnhart presents about why we should all buy an electric car (“Clean Fun with an Electric Car,” EW 12/5/19). The Tesla S weighs nearly 5,000 pounds, including a 1,200-lb. lithium-ion battery, and sells for over $75,000. That’s an awful lot of steel, glass, plastic, rubber, and other materials to make the car, and a lot of lithium, cobalt, and other elements to make the battery. The less luxurious Chevy Bolt has a 960-lb. battery, weighs nearly 3,600 lbs., and sells for about $35,000. There are now 276 million motor vehicles registered in the U.S., and more than 1 billion cars worldwide. The number of cars is expected to rise to 2 billion by 2035. If those additional cars are Bolts, for example, that would require 480 million tons of Li-ion batteries and a total of 1.8 trillion tons of materials to make them. Imagine the stress on our planet of mining that many resources.

Compare that to the resources needed to make electric bicycles. My electric bike weighs about 50 pounds, including a 9-lb. battery. That’s roughly 1% of the weight of an electric car and battery. In other words, 100 people could get around on electric bikes for the same amount of resources as one person in an electric car. Instead of gushing about electric cars, shouldn’t we be promoting more biking, better mass transit, or even walking if we want to create a more sustainable future for humankind and the natural world? 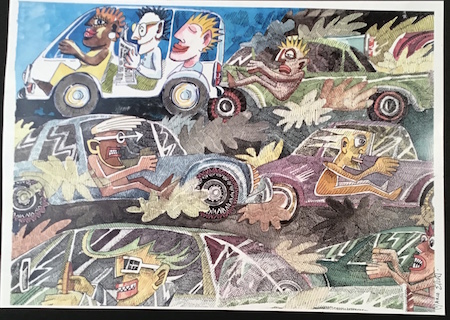 
* The Green Geezers is a moniker sometimes given to an informal group of artists, writers, and environmental activists in the Pacific Northwest dedicated to rattling politicians, offering solutions, and raising awareness of the climate crisis through life-style choices, artwork, essays, poetry, slide shows, letters to editors, meetings with politicians, protest marches, and participation in and donations to local, national, and global movements. All are either aspiring vegetarians or vegans who understand that food, and the plants, animals, and land and water that offer it, are sacred. All are careful of their consumption and energy use, mindful that the Earth’s resources are finite and humans are but one species that relies on their perpetuity.

—Jack Cooper, in collaboration with Steve Goldman and MaRco Elliott

1. In 1980, MaRco Elliott painted a mural (250 feet long x 15 feet high) for the city of Cannes. After years of UV and weathering damage plus graffiti vandalism, the mural had to be destroyed. Because it could not be restored, it had to be redesigned completely. The city of Cannes wanted the artist to duplicate the original 1980 mockup, which he chose not to do. Instead, he proposed what he calls a “more Guernica-like narration,” as illustrated by the two paintings above. They are from a single preliminary study that Elliott used to create his final proposal to the city.

A fragment of the original 1980 mural is featured at his website: http://marcoelliott.com/

has devoted 33 years working to restore rivers and wetlands and revegetating other disturbed lands, including 22 years as the natural resources program manager for the California Tahoe Conservancy. He now speaks about climate change in schools and community groups, and also teaches workshops on Nonviolent Communication.

is a painter and author who grew up in the foothills of the southern Mediterranean Alps and attended the École Nationale des Beaux Arts in Paris. As a young man, he pursued his education by traveling overland from Europe to the Himalayas, then to Mexico and North Africa, always keeping a visual and written diary throughout his travels. After settling in southern France, he was awarded art commissions for street murals, created a body of plein-air paintings, and often made ends meet as a graphic artist/illustrator and by doing manual jobs, most notably as an apprentice stonemason restoring a medieval castle in the Haut Var.

In 2009, MaRco and Joann moved to Eugene, Oregon, where they both continue to expand their body of work. Read more about MaRco’s travel adventures in his expanded bio and visit his galleries at: http://marcoelliott.com