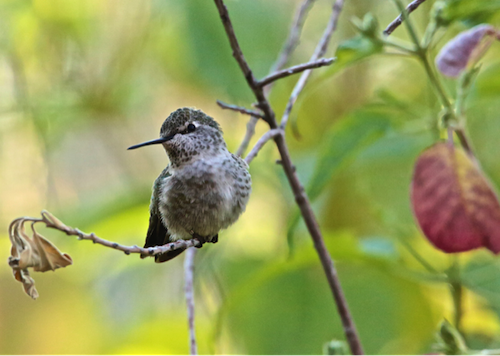 Untitled photograph of hummingbird
(The Desert Museum in Tucson, Arizona)

The fallen nest is no bigger than a half dollar and as soft as a ball of dryer lint. Scabrous blue-green lichen fleck the exterior along with shreds of redwood bark. Everything is tethered by snippets of spider silk, judiciously gathered and sculpted: a sweater cup strong enough to hold two eggs, then two nestlings, and with any luck, it becomes the launch pad for two fledglings. And I think of my departed friend, who fed hummingbirds on the hospice balcony. He summoned enough strength to coax Anna’s and Calliopes to come close for a glimpse of their jeweled toughness.

short prose has appeared in 100 Word Story, KYSO Flash, Mid-American Review, Moon City Review, Quarter After Eight, SmokeLong Quarterly, Unbroken, and Wigleaf. Her work is anthologized in Nothing Short of 100 (Outpost 19, 2018), Accidents of Light: KYSO Flash Anthology 2018 (KYSO Flash Press), and NOON: An Anthology of Short Poems (Isobar Press, 2019). Her most recent collections include a prose poem e-chapbook, Qualia (White Knuckle Press, 2017), and a collection of short poetry, for Want (Ornithopter Press, 2017). She is also the author of two award-winning haiku collections: apology moon (Red Moon Press, 2013) and The Horse with One Blue Eye (Snapshot Press, 2006). A haibun of hers was nominated for a Pushcart Prize in 2019. She is an associate editor for The Heron’s Nest.